Skip to content
Do you love the spicy and sweet aroma of cassia broken? You want to enjoy the amazing health benefits of cinnamon ? However, you do not know what cinnamon powder used to cook? In this article, we will show you how to cook braised meat cinnamon
With this stewed cinnamon rib. you just need to add a little spice of cinnamon powder to create the aroma for the dish. The characteristic pungency is that you have immediately delicious food to change the daily menu of the family. So you have another recipe for cooking with cinnamon powder.

– Pork loin after being washed, sliced ​​about 0.7cm thick. Then marinated with cinnamon powder, sugar and seasoning seeds for 20 minutes to infuse.
– Put the pan on the stove, add cooking oil to heat and add minced garlic to the non-yellow. Then, marinate the ribs evenly for 5 minutes
– Next, put cinnamon stick on top. Pour water to cover the surface of the meat and add ½ spoon of fish sauce, seasoning and sugar. Cover and simmer for 30 minutes to allow meat to soften and taste. Then turn off the heat and use with hot water. 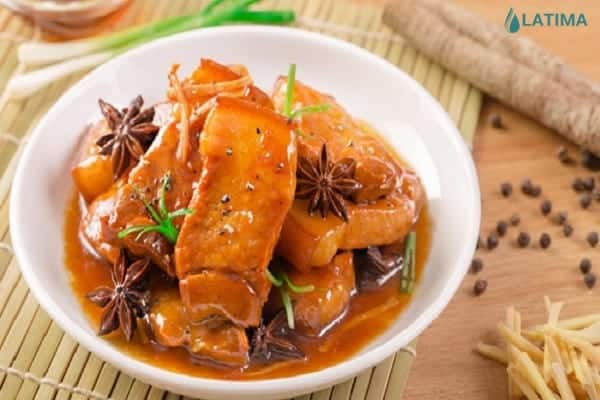 So we have a plate of bacon with cinnamon powder. The aroma of cinnamon, and the spices absorbent meat slices.
Enjoy food with white rice, it’s great. It’s delicious with simple food, just good for your family’s health. Cooking dishes with cinnamon powder helps bring new flavors to the dish.
Enjoy your meal and keep following us for more delicious dishes!