Dried Cinnamon has long been famous as a valuable herbal medicine for the body. In addition to being used as a spice, people also know how to cook Cinnamon ginger tea to drink to restore health and improve the functioning of organs. Drinking cinnamon water every day is a way for you to relax, avoid stress and increase life expectancy. The raw materials used to cook cinnamon water are derived from herbs such as cigarette cassia , jujube, ginger, honey, … so completely benign and easy to use.

The way to cook cinnamon tea is very simple, quick and straightforward. On cold days, drinking a glass of ginger tea will warm the stomach, limit colds, wind, eat well, sleep well. This drink is very nutritious and suitable for adults to improve mind and reduce illnesses. Come and join us to make this drink right away.

Ingredient need to be prepared

Instructions on how to do it

– The cinnamon you bring to wash and dry. Jujube is split in half to remove the apple seeds.

– Add the whole ingredients with 1/2 of ginger to a pot to boil. 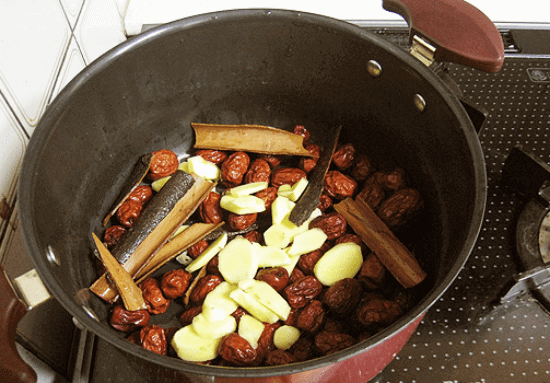 – Boiling water, add a moderate amount of filtered water and cover and boil it on high heat.

– Next, add the honey, then add the remaining ginger to cook for fragrant.

– Cook for about 3 minutes and then turn off the heat.

Pour ginger cinnamon tea into a glass and a few slices of jujube. Using tea while it is still hot is much better. Note that in the absence of honey, brown sugar can be used to create a natural sweetness for the drink. Cinnamon and jujube are both precious herbs not only used to treat diseases but also to cook, cook nutritious drinks. To buy these products safely, quality, hygiene and effective use, you can go to Dai Van Phat supermarket (259B Hai Ba Trung, Ward 6, District 3, Ho Chi Minh City). There are also many other herbs that you can buy and cook everyday.

The effect of Cinnamon ginger tea

Not only is a delicious, nutritious drink, ginger cinnamon tea also has many other useful effects that you should not ignore:

– Support effective weight loss while removing toxins inside the muscle to the outside. Drinking cinnamon ginger juice helps you feel comfortable, prevent hunger and cravings to keep in shape.

– In cinnamon water, there are many antioxidants like polyphenols and proanthocyanidins that help boost the immune system. In addition, it also has antibacterial, antiviral properties that help reduce the risk of other diseases such as heart disease, respiratory diseases …

– In cinnamon water, there are many substances that help to reduce toothache pain, reduce swelling.

– Cinnamon ginger tea helps improve skin texture and skin, preventing toxins from clogging the skin. Every day you can manually make cinnamon ginger juice to drink to nourish the body. This is a quite tasty drink, so you will definitely like to use and drink regularly. Wish you success with this drink.