Skip to content
Making cinnamon butter bread this way is super easy because it doesn’t have to be kneaded. Use cinnamon powder, butter, and brown sugar to roll. 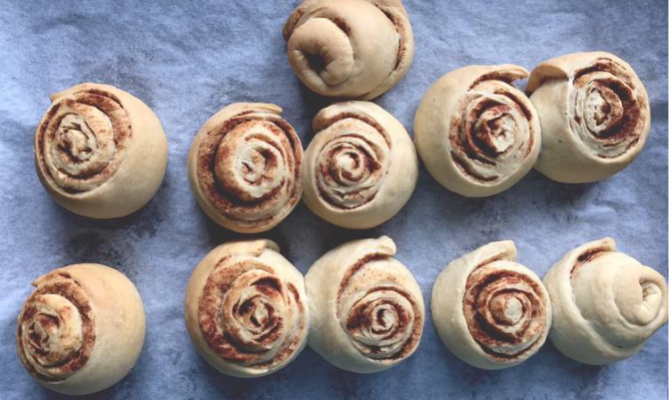 Warm the milk at a temperature of 30 degrees and then mix the yeast with 5g of coconut sugar into the milk. Leave it on for about 10 minutes.
Get a separate bowl to make the cinnamon powder sauce. We mix cinnamon powder + 3g coconut sugar + 10g melted butter. Mix all of these together
Then pour the yeast mixture into a large bowl and spread the flour, mix with the remaining 20g of melted butter and eggs.
Mix well, if wet you can add a little flour. Place on a flat surface and mix until dough is smooth, then roll out and beat with cinnamon sauce.
Roll out and cut into bite-sized pieces, place on a tray lined with foil and let the dough rest for about 2 hours.
After 2 hours, the dough has doubled in size.
After 2 hours of incubation, turn on the oven at 180 degrees for about 5 minutes, then put the cake tray in the oven and bake for 20 minutes and you have cinnamon butter bread for your family to enjoy.