Cinnamon trees in the natural forest are often planted mixed with many broad-leaved trees such as kapok, inner, fat, bodhi, odd, squishy, ​​etc. At a young age, cinnamon trees need an appropriate shade to grow and develop. Stick Cassia in the forest with enough light have thick, oily bark, high yield and good quality of bark, Cinnamon bark extract is also better . Cinnamon trees after 8-10 years of planting will start to flower and bear fruit, cinnamon often flowers in April, May and ripens in January and February, you can collect ripe seeds on the tree, or collect ripe fruits that fall around the base of the tree. Cinnamon seeds are oily seeds, when stored at high temperature, low humidity, and strong light, the seeds will melt and lose the ability to germinate. In nature, the distribution of cinnamon seeds can be caused by birds and animals that eat and release the seeds through feces, can regenerate at the base of the mother tree, can also be dispersed by running water or brought by humans. Cinnamon seeds go to other places to grow.

Cinnamon trees over 15 years old, begin to grow stably, give many fruits and stable seed quality, the fruiting cycle is usually every 2 to 3 years, so choose trees that grow and develop well, wide canopy, balanced, free from pests and diseases and especially high content of essential oil in the bark to make seedlings. The problem of selecting varieties and planting cinnamon forests is an urgent requirement today. 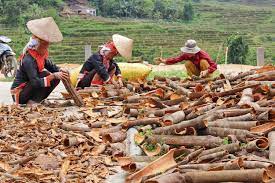 The Dao, Muong, and Thai people far away when asking for cinnamon varieties is not much, they just need to dig and pluck the regenerated seedlings in the forest and bring them back to plant, later due to the demand for more and more seedlings, people have known. taking advantage of the law of natural regeneration by promoting the regeneration of seedlings right under the mother plant and thereby creating more seedlings. Where people grow cinnamon a lot, it is necessary to set up nurseries with a small to large scale in order to sow seedlings for afforestation in a village, a commune or an entire area as planned.

Sowing cinnamon like many other forest trees, must choose the right soil, have to have a cover and adjust the light, fertilize, and regularly take care of the tree when the tree is young. Currently, the application of the technique of growing cinnamon in pregnancy has brought about high efficiency. After a year in the garden, seedlings usually reach an average height of 30cm, have 10-14 leaves, diameter of root neck from 0.5-0, 7cm. 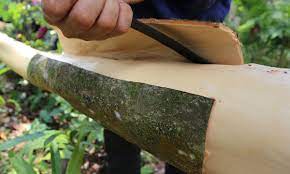 Cultivation and wait for the date to get the cinnamon bark extract:

Growing cinnamon is a good and long-standing custom of the Dao, Muong, Thai, Ca Toong, and Boo ethnic groups in our country. Cinnamon gardens are considered as valuable assets of grandparents, parents leave them to their children and grandchildren, dividing fields for children to grow cinnamon to prepare to build their own family, planting cinnamon on the occasion of the New Year… are all good practices. . There are two seasons of cinnamon growing in a year, spring in February and March and autumn in August and September. Depending on the weather in each region, the Yen Bai people focus on planting cinnamon in the early spring months and the provinces in the region. Trung is planted in the autumn when there has been a lot of rain, the soil is moist, the weather is mild, and the hot wind is avoided in the summer.

Cinnamon is grown in household gardens, around villages in offices and schools, cinnamon is also grown on upland fields and hills, creating concentrated areas with larger areas, especially cinnamon. on upland fields by agro-forestry method, it is possible to take short-day plants to raise long-term plants, and wait for the day to get the cinnamon bark extract 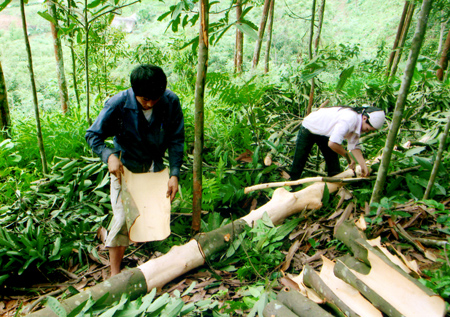 In practice, due to the requirement to have many products at the same time, it is common to apply the method of exploiting all the bark of the whole tree in one harvesting season (white exploitation), the advantage is to get a lot of fruit. product and easy to apply. There is also a method of exploiting trees with a predetermined diameter (selective mining) . This method obtains desired products, but it is difficult to arrange exploitation, and the business cycle is long. In our country, there are 2 seasons of cinnamon bark extraction. In the spring, the weather is less rainy and warm, which is very suitable for mining and processing cinnamon bark. In autumn, there is usually a lot of rain, the weather is very cloudy, so the bark is moldy and rotten.

However, people said that the cinnamon bark harvested in the autumn season has more essential oil content than the cinnamon bark harvested in the spring season, when exploited in the right season, the bark is easily peeled off the trunk, the bark is not broken, broken, or killed. The heart is attached to the body. In a forest when trying to peel off some trees that are easy to peel, in general the whole forest can be peeled, the technique of cinnamon bark extraction usually goes through the following steps:

– Prepare the forest for exploitation, peel off a few trees to determine the time of exploitation.

– Use a peeler knife to peel off the bark from the trunk according to the defined specifications.

In addition to the article about Cinnamon Bark Extract, there are other articles such as