Skip to content
Cinnamon has long been known for its wide range of health benefits. However, did you know that this food can cause some cinnamon’s side effects if consumed in high doses?
In fact, Cassia cinnamon is completely harmless and safe to eat in small or medium doses. However, if you eat cinnamon in high doses, this can cause health problems. This is because cinnamon contains high levels of coumarin compounds.
Research has proven that consuming too much coumarin will damage the liver and increase the likelihood of cancer. In addition, there is ample evidence to suggest that excessive consumption of round cut cassia is associated with many other side effects.

Causes damage to the liver

As mentioned above, Cassia cinnamon – common cinnamon, is a rich source of coumarin compound. It contains approximately 5 mg of coumarin / tablespoon (2g of cinnamon) – while star anise contains only a small amount.
The recommended daily limit of coumarin is approximately 0.1 mg / kg of total body weight, such as you can only consume up to 5 mg of coumarin per day if you weigh 60 kg. This means you cannot eat more than 1.5 tablespoons of cinnamon every day. In addition, several studies have also found that consuming too much coumarin will cause toxins to accumulate in the liver, thereby damaging the organ.

Animal studies have shown that consuming too much coumarin – the compound in Cassia cinnamon – increases the risk of some forms of cancer.
An additional example of this result is that studies in rodents have shown that excessive consumption of coumarin can cause the formation of cancerous tumors in vital organs such as the lungs, liver and kidney. The form of coumarin causing tumors is currently unknown.
However, some scientists believe that coumarin can cause repeated damage to some organs. Over time, damage can cause healthy cells to be replaced by tumor cells, which can lead to cancer. Most animal studies have shown coumarin results in carcinogenic effects. However, we still need more human studies to understand the relationship between cancer and coumarin consumption in humans.

Cause mouth sores – Cinnamon’s side effects

Some people have experienced mouth ulcers due to eating too much cinnamon. Cinnamon contains cinnamaldehyde – the compound that causes allergic reactions when you absorb in large doses. Consumption of cinnamon in small amounts does not seem to cause this kind of reaction because saliva will help you prevent chemicals from coming into contact with the oral cavity for a long time.
In addition to causing mouth ulcers, cinnamaldehyde can cause allergic symptoms including swelling of the tongue or gums, a burning sensation, itching in the mouth and the appearance of white patches in the oral cavity. Although these symptoms are usually not serious and require medical intervention, they will make you feel uncomfortable.
However, it’s important to remember that cinnamaldehyde only causes mouth sores if you are allergic to this compound. You can go to the hospital for a test to see if you have this allergy through a skin patch test (Skin patch test).
In addition, mouth ulcers can affect most people who consume too much cinnamon oil or cinnamon-flavored gum, because these products may contain fairly high levels of cinnamaldehyde. 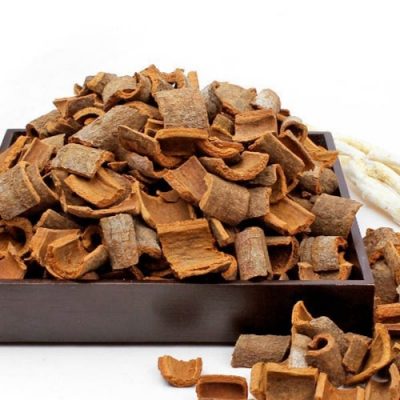 Chronic high blood pressure is a serious health problem. If left untreated, it can lead to diabetes, heart disease and a host of other health problems. Cinnamon has long been prized for its ability to lower blood sugar levels. Studies have shown that this food may play a similar role to insulin – the hormone that helps remove sugar from the blood stream.
Although eating cinnamon in moderation may lower blood sugar levels, if you consume it too much, this can lead to very low blood sugar. This is a hypoglycemia – a condition that leads to fatigue, dizziness and even fainting. Most people who are at high risk of hypoglycemia are those who often take diabetes medications. This is because cinnamon can enhance the effectiveness of these drugs, causing blood sugar levels to drop too low.

Consuming too much round cut cassia without skin at one meal can cause breathing problems. This is because the food has a special texture that makes it easy to inhale through the nasal cavity into the lungs. Accidental inhalation of cinnamon powder or the smell of cinnamon can cause symptoms such as coughing, vomiting and shortness of breath.
In addition, cinnamaldehyde contained in cinnamon is a throat irritant and may cause other respiratory problems. People with asthma or other medical conditions affecting the respiratory system should pay special attention to avoiding inhaling the scent of cinnamon. This is because they tend to develop respiratory problems easily after breathing in cinnamon powder.
When using the above foods, remember to pay attention to the conditions happening in your body to have timely remedies.
– Cinnamon’s side effects:
The articles are for reference only, not a substitute for medical diagnosis or treatment.
Follow me for more information on cinnamon! Thanks everyone!