The gene-preserved cinnamon tree varieties will propagate enough to provide Tra Bong to build a cinnamon-growing area, providing an opportunity to escape poverty, enrich the Cor people and help rebuild the mountains and forests of Western Quang Ngai.

Tra Voong village (Tra Thuy commune, Tra Bong district) lies perched on the majestic peaks of Rang Cua mountain, covered by clouds all year round. Along with Ca Dam mountain (Tra Bui commune, Tra Bong district), Rang Cua mountain is considered the largest “cinnamon basket” in Tra Bong when thousands of hectares of Vietnam cinnamon have been planted and preserved by people for hundreds of years. 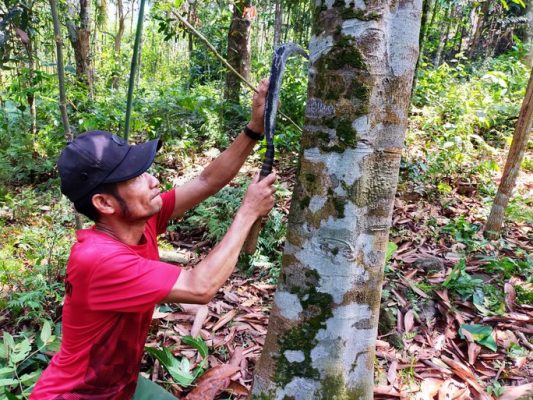 “Green Gold” of the Cor

According to Mr. Ho Van Thanh, in the past, the cinnamon forest in Rang Cua mountain was immense, and majestic, becoming the pride of the Cor people in Tra Voong. Every house in Tra Voong also has a forest with thousands of cinnamon roots, and a hundred-year-old tree that people cannot hug. But about 10 years ago, there was a year when cinnamon tree was sold and no one bought it and couldn’t exchange anything, so many Cor families cut down the cinnamon forest to plant acacia forest. The cinnamon forest fades away.

“The house that is determined to keep the cinnamon forest despite living in misery will be rewarded. Now, any house that still keeps a lot of cinnamon tree is like hiding gold in the forest. Cinnamon sells for quite a high price, harvested every few days. Each time, each harvest can make millions of dollars a day. Not only does it bring high economic value, but the cinnamon forest also helps villagers rebuild the old forest to preserve the land and water for the village,”  Mr. Ho Van Thanh said.

“Cinnamon tree of the Cor people in Tra Bong can live up to several hundred years, has a special aroma, a lot of oil, nowhere else can match it… It’s possible because of the way it is cared for and harvested because here, Our people grow cinnamon to be over 7 years old to harvest for the first time. Each year, cinnamon is only harvested twice. The first time is the first season (from February to April of the lunar calendar) and the next time is the back season ( around the 6th-7th lunar month). The most valuable cinnamon harvest is the bark, then the trunk, branches, leaves, fruits…; everything has money” – Mr. Ho Van Cong, who owns more than 7,000 cinnamon roots in Ca village said.

Mr. Tran Van Suong (Vice Chairman of Tra Bong District People’s Committee) said that currently, communes such as Tra Bui, Tra Thuy, and Tra Hiep … are the localities with the largest cinnamon tree area in Tra Bong. Currently, there are about 6,000 Cor households growing nearly 6,000 hectares of cinnamon, with an annual output of about 2,000 tons/year. “Cinnamon in recent years has brought a stable income to many families and is purchased by traders at high prices, thanks to its good quality, favored by the market. Products processed from Tra Bong cinnamon are mainly made from Tra Bong cinnamon tree. exports to China, India, and South Korea…” – Mr. Suong said happily. 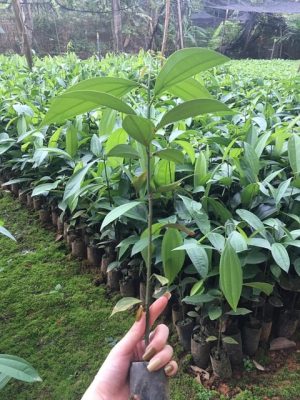 Also according to Mr. Suong, in recent years, due to the strong development of industrial trees such as acacia, the area of ​​cinnamon has also shrunk. . “Currently, the People’s Committee of Tra Bong district is coordinating with the Department of Science and Technology of Quang Ngai province and the Quang Ngai Provincial Forest Protection Department to carry out a project to conserve Tra Bong native cinnamon varieties. In the future,  this cinnamon gene will be propagated to provide enough for Tra Bong to build a cinnamon-growing area of ​​over 10,000 hectares. This is an opportunity to escape poverty, enrich the Cor people and help rebuild the mountains and forests of western Quang Ngai…” – Mr. Suong confirmed.

Ms. Huynh Thi Thanh Thuy, Head of the Department of Agriculture and Rural Development (Agriculture and Rural Development) in Tra Bong district, said that a few years ago, when the unit was assigned the task of coordinating with the Quang Ngai Provincial Forest Protection Department to investigate and select “mother” cinnamon trees with large, strong bodies and good tolerance to pests and diseases to preserve native cinnamon varieties. The team had to wade through the forests and villages to select each qualified cinnamon tree, locate and monitor the tree’s growth.

“We have now selected over 200 cinnamon trees with genes for good growth, health, canopy, and strong body to preserve and store. Each cinnamon tree is selected, most of which are located in gardens or forests of people. The cinnamon owner is supported with wages to take care of 250,000 VND/plant/year. The conservation of more than 200 cinnamon trees is aimed at providing dominant seeds, strong indigenous cinnamon varieties to develop Tra Bong cinnamon specialized cultivation area on a larger scale” – Ms. Thuy believes to said that.

According to Ms. Thuy, from the selected varieties of cinnamon, Tra Bong district’s Department of Agriculture and Rural Development has also nursed and planted on a specialized cultivation area of ​​about 10 hectares in sub-zone 42, Tra Thuy commune, and sub-zone 34, Tra Hiep commune, Tra Bong district. “We are currently continuing to expand and guide people to participate in the project,” said Ms. Thuy.