how is cinnamon made? For high cinnamon forest: After planting 15-20 years, then start harvesting. There are two seasons for peeling cinnamon: spring cinnamon is peeled in March 2-3, good quality and cinnamon is harvested in late July and early August. Before harvesting, cut a piece of bark near the base to make water. and nutrition does not go up, so that whole cinnamon flakes off the trunk, the peeling process will be easy. If the trunk is too large, allow another two weeks for the bark to peel off the stem.

How is cinnamon made 1

Take a special knife to peel cinnamon bark, cut a bark round the trunk at a position 50-60cm above the ground. Then again cut one round above 40cm below the ring, between the two circles cut a straight vertical line. From the top down, use a small knife to peel off the shell. Continue cutting the shell ring up to the end.
After harvesting cinnamon bark (peeled) for the first time, it is necessary to strengthen care for the stems to sprout again and grow strongly. After 10 years can be harvested a second time.

– How is cinnamon made?
After planting 3-5 years, it can be harvested. Choose the biggest trees to cut, accounting for about 3/3 of the total number of trees per harvest. Cut the original tree to take the bark, cut the tree twice a year, then cut the tree again for the next 3 years. Each harvest can harvest 1.2-1.5 tons of fresh bark per hectare. Later on, every year of harvesting this way, the average yield can reach 1 – 1.2 tons of fresh pods / ha. 16-20 year old stumps can reach 20-25cm in diameter, the number of shoots into stems is about 8-14 stems, which is the beginning of the period of strongest growth. Cinnamon harvested to 70-80 years, until poor growth, then remove the old old roots, grow new cinnamon forest. 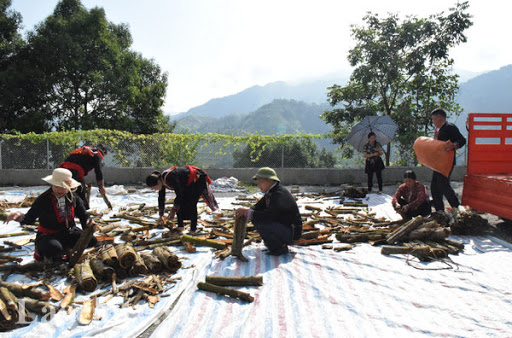 How is cinnamon made 2

How is cinnamon made:
Freshly collected bark, spread to the yard to dry and then dried into bundles of 20-25kg for drying. The kilns are designed to be small or large depending on the size of production per household, usually enough to dry 5-10 quintals of fresh shells. According to experience drying cinnamon spread a layer of rice bran to the bottom of the oven, spray tea water on the two ends of the shell, arrange bundles tightly, tightly press together, top cover a layer of bran and cover the top with a layer of rice. Allow cinnamon to evaporate while drying. Just incubation like that during drying, after 21 days, unloaded cinnamon from the oven. Dry at 70-75 degrees Celsius.

Parts of cinnamon tree can store essential oils, but cinnamon bark is a higher value product, so rarely used for storage but mainly used as medicine. Cinnamon leaves picked, dried, bundled into bundles of about 10kg, stored in storage, 1 month after taking away essential oils.
Do not pick the leaves in the spring and before peeling them.
In addition to taking leaves to store essential oils, in the fall when plants stop growing, pruning small branches can also be used to distill fine oils.

How is cinnamon made.
After drying, put cinnamon bark neatly in cartons or bundle in plastic bags. Do not let broken cinnamon bark will reduce the quality of cinnamon. Cinnamon essential oil has the ability to corrode metal. The oil obtained after distillation should be put into enameled barrels or food plastic containers. Containers of essential oils should be sealed tightly. You can put a thin layer of water on top to limit evaporation of essential oils, while preventing exposure to air oxygen. Both dry cinnamon bark and cinnamon essential oil should be stored in a cool, dry place and avoid direct sunlight.
Now you know how to make cinnamon?
Follow me for more information on cinnamon! Thanks everyone!