Vietnamese Cinnamon is a plant that has not only been associated with the people of Binh Lieu for a long time but is also a tree of great economic value, stable source of income from cinnamon trees of Binh Lieu people. These days, all over the villages from highland to lowland in Binh Lieu district, people are busy harvesting cinnamon. Since cinnamon brings a significant source of income, this herb is also developed, branded, processed… to improve the product value.

Stable source of income from cinnamon

Cinnamon is a woody, perennial and the mature tree can be over 15m tall. Plants grown in Binh Lieu after about ten years can be exploited and peeled for the first time. The entire trunk, branches, roots and leaves of the cinnamon tree can be distilled essential oil, used as medicine, and as a spice. Cinnamon is suitable for the climate and soil in Binh Lieu district, so it is scattered in most communes in the district. 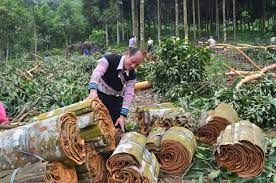 In the days of April, when the sun has just come out of the mountain, people in all villages and hamlets in Binh Lieu district start their new day with the work of peeling cinnamon bark. From afar, the scent of cinnamon has spread all over the streets. In the cinnamon forests in the middle of the harvest season, the atmosphere is bustling.

Ms. La Thi Nguyen (Ban Chuong village, Luc Hon commune) said: “Cinnamon trees have high economic value because the same cinnamon tree can be exploited many times, can be sold from bark to stem and leaves. Currently, my family has about 1 ha of cinnamon forest that is being harvested. Each day, an average person can peel more than 40kg of cinnamon bark, from the beginning of the crop to now, the family has harvested and sold nearly 20 million cinnamon coins. Last year, with the price of fresh cinnamon bark was 17,500 VND/kg, my family earned more than 70 million VND. The income from cinnamon has helped the family to cover their daily living expenses and feed their children to school. This year, my family continues to plant more than 10,000 new cinnamon trees to both green the forest and increase the family’s income.”

Stable source of income from cinnamon trees of Binh Lieu

According to calculations by specialized agencies, the estimated total economic value on an area of ​​1ha of cinnamon (about 15 years) is 580 million VND from thinning to collect branches, leaves and bark; and from harvesting in the last year, collecting branches, leaves, bark, and trunks of wood; In addition, there are by-products such as seeds, biological tablets. The average profit of people growing cinnamon is estimated at 38.7 million VND/ha/year, more than 2 times higher than that of other trees. According to research, depending on the quality of cinnamon bark, currently, the price of 1kg of fresh cinnamon bark is ranging from 21,000-22,000 VND/kg, the shredded bark is from 15,000-16,000 VND/kg, and the dried cinnamon bark is priced at 45,000-47,000 VND/kg, Stable source of income from cinnamon

However, there are periods when the price of cinnamon fluctuates up and down, making people uneasy. For example, the price of fresh cinnamon in previous years only ranged from 17,500-18,500 VND/kg. The export market is also sometimes unstable. Therefore, traders now mainly buy cinnamon and then hire people to peel, dry, and then export it. 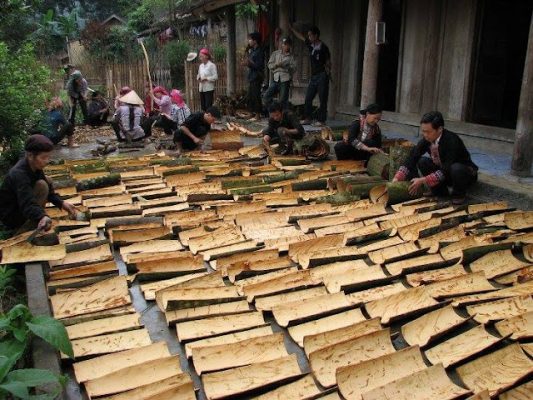 Although the price of cinnamon is higher than in 2018, due to the influence of the weather, the cinnamon tree is slow to peel, plus a lot of rain, so it greatly affects the harvest of people. Ms. Nguyen Ngoc Quynh Nhung, the owner of a facility that buys cinnamon bark, said: “Every year around this time, I buy a ton of cinnamon every day, but this year I can only buy half of it. Hopefully next time the weather will be good, people will go to the forest to harvest evenly, the amount of cinnamon purchased will increase higher. Because the output of cinnamon trees is available, the amount of cinnamon that I buy from the base is transported and consumed quickly.”

Cinnamon is a tree with several uses, bringing high economic and export value, but perhaps to further increase the value of cinnamon products requires a long-term plan, methodical investment and participation of potential businesses is needed, so that cinnamon can truly become a source of stable income, gradually contributing to poverty eradication for the people of Binh Lieu district.

Binh Lieu people have a stable income from cinnamon trees to help them live better!