The secret of cinnamon’s origin

They also sought to prevent other merchants and adventurers from seeking cinnamon. Make up extraordinary stories about how to harvest cinnamon.

They say the giant birds have used the best cinnamon trees, nesting on top of mountains that no one could ever reach.

People have to put beef on the ground to lure birds. And when the birds bring back meat, the nest will collapse because it’s too heavy. That’s when they came to get cinnamon.

Despite these rumors, adventurers have finally discovered the mysterious source of this spice.

– Christopher Columbus wrote to Queen Isabella, claiming he found cinnamon in the New World. But the sample he sent was determined to be just a normal bark, not cinnamon.

– In 1539, Gonzalo Pizarro, a Spanish explorer, was determined to search for cinnamon in America. This trip has turned into a dangerous adventure. The expedition must cross the Andes, battling insects and reptiles. Finally, they crossed the Amazon River to find “El país de la canela” (land of cinnamon). The 18-month adventure failed. 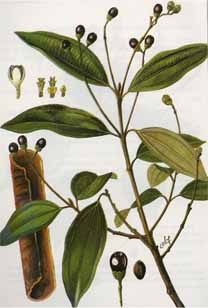 Find out the Cinnamon tree

The struggle for control of cinnamon between Portugal and the Netherlands brought Ceylon into chaos for nearly three centuries:

– In 1518, Portuguese merchants found cinnamon in Ceylon (today Sri Lanka or Sri Lanka). They occupied the country and enslaved the people. This has helped them control the cinnamon trade for over a century.

– By 1638, the Kingdom of Kandy had taken control thanks to an alliance with the Netherlands. Since then the Dutch have held a monopoly on cinnamon for nearly the next 150 years, until Ceylon fell into British hands in 1784.

– By 1800, cinnamon trees were grown in many parts of the world made this spice lost its previous position.

Today, cinnamon is present all over the world, mainly Ceylon and Cassia cinnamon.

In Europe still prefer Ceylon cinnamon, while the US and other countries prefer Cassia cinnamon.

Cassia cinnamon originated mainly from Vietnam and Indonesia, has a stronger flavor than Ceylon, lower prices and is more widely used.

The taste of cinnamon

There are hundreds of different varieties of cinnamon, so there are many flavors. People often describe the taste as sweet, hot, spicy, woody, etc. You can taste it a little bit and you will feel it.