The model of make organic cinnamon cultivation has helped the Yao ethnic people in Phong Du Thuong commune, Van Yen district escape poverty, have a stable income of up to hundreds of millions, even billions of VND per year.

Just finished the second cinnamon harvest this year, Mr. Trieu Toan Phu – Yao ethnic people in Khe Ma village, Phong Du Thuong commune (Van Yen, Yen Bai) proudly showed that his house has 9 hectares of cinnamon grown on reclaimed land. Each year he harvests 2 crops, in March and August according to the method of pruning or white exploitation. In particular, if you choose to exploit white, it takes 10 years from planting to full harvest.

With 9 hectares of cinnamon growing, his family chooses to grow it all the time, harvesting and planting a new one on one hectare each year. By doing so, every year there is a cinnamon harvest. Accordingly, this year the family who peeled cinnamon sold 250 million VND. After deducting the cost of new planting and living expenses of the family, he saved 180 million VND.

Almost every year for nearly a decade, he has earned that amount of money. In some years, minus the expenses, the remaining amount is about 120 million VND, and there are years when saving about 180 million VND. This money he took away so far has also been 1.5 billion, he revealed.

Mr. Phu said, cinnamon is a local specialty, his family has been growing cinnamon for many years, but they are all spontaneous. In the harvest season, the price of dried cinnamon bark is only 40,000 VND/kg.

This year, the family joined the group to grow cinnamon according to the organic process. No fertilizers were used when planting, no herbicides were used.

“I also have to keep a diary of every day of care to make documents for the project staff to carry out the procedures to apply for product certification and then export it.” He also said that, growing organic cinnamon trees, peeled cinnamon bark is purchased by businesses for 60,000 VND/kg, one and a half times higher than when sold to traders. 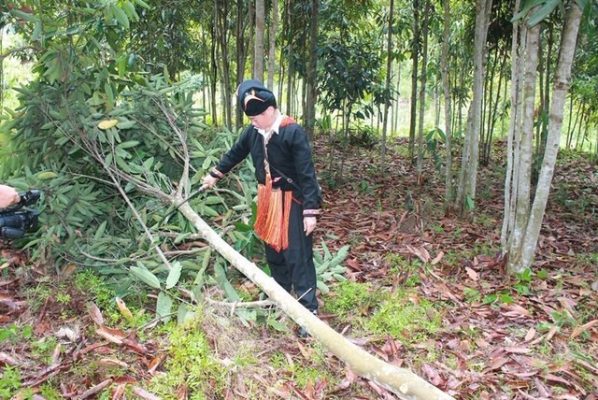 In addition to the cinnamon extracted from the cinnamon forest her family grows, Ms. Phuong also acts as an agent to buy cinnamon from farmers in 3 communes: Phong Du Ha, Xuan Tam and Phong Du Thuong and then sell it to factories. processing and exporting cinnamon. This year, her facility collects 600 tons of dried split cassia, of which more than 200 tons are certified organic cinnamon.

Talking to reporters, Mr. Lo Van Manh – Deputy Secretary and Chairman of Phong Du Thuong Commune People’s Committee said that in the past, people produced cinnamon mainly on a small scale, with an area of ​​cinnamon trees in the whole commune of about 300 hectares. Up to now, 94% of households in the commune have participated in planting with an area of ​​about 2,000 ha. Most of them are developing in the direction of large-scale goods.

Since 2018, the commune has directed and coordinated with a number of businesses to propagate and mobilize local people to change the model from growing natural cinnamon to growing cinnamon in compliance with the clean production process and make organic cinnamon. to export to European countries, America…

According to Mr. Manh, cinnamon not only helps people eliminate hunger, reduce poverty, and get rich, but it is also an economic and cultural symbol of the Dao ethnic community, contributing to greening bare land, barren hills and protecting forest environment.

Currently, Phong Du Thuong commune has more than 200 households participating in organic cinnamon cultivation in association with businesses to export to Europe. These households are all trained in the process of planting, tending, exploiting and transporting to ensure that the products are marketed in accordance with the standards.

“Although the process of growing and taking care of it is complicated, the price of organic cinnamon is also higher than that of traditional cinnamon,” said Manh.

The make organic cinnamon growing model ensures the goals of forest development, biodiversity and natural resource environment. This development direction is also being replicated by the district to communes. Because cinnamon is not only a specialty tree with high economic value, but also has the effect of greening bare land, bare hills, protecting and preventing soil erosion.